In wake of the COVID pandemic, millions of hockey players and ice skaters were stuck at home with no way to practice hockey moves or ice skating strategies. Until they learned about synthetic ice. As soon as the word got out that people could build high-quality ice skating rinks in their own homes, they began to go online and order tons of synthetic ice panels.

Once they got their panels, they found that installing skatable flooring was even easier than they had thought to begin with. All they had to do is find a hard, flat surface that would support the ice panels and build from there. You can imagine how happy many of the die-hard ice hockey players were.

What is Synthetic Ice, Anyway?

Since you will be installing the ice panels in the place where you live it might be a good idea to at least have a little bit of understanding about what synthetic ice is.

Synthetic ice was first made in the 1960s in hopes to find a solution for ice skaters to be able to skate in all weather types throughout the year. At first, the flooring was made out of interlocking panels kind of like what we have today, but not as effective.

The first artificial ice flooring had to be constantly sprayed with a silicone compound that helped the skaters be able to glide across the surface. One of the major drawbacks of this compound is that it had to be scraped away or else it would build up and cause a grimy goo on the flooring. There was a lot of work involved with keeping and maintaining synthetic ice rinks back in the day.

Modern-day artificial ice is made out of a much more advanced type of plastic than it was in the 1960s. As developers gained more knowledge about the way that plastic was formed, they began to understand some of the basic building blocks of molecules and the structure that they had to offer. It wasn’t too much longer than polymer plastics were introduced into the world, and that is when the synthetic ice we are familiar with today began its journey.

Synthetic ice is basically special plastic that was developed from the molecular level and enhanced so that it would have the ability to supply its own lubricating system that never had to be applied externally or scraped off. It is:

It is not a secret that ice is actually water that has been frozen. However, in order for ice skates to slide across it without much resistance, there has to be a little science involved. As the ice skate blades skate across the ice they cause friction heat to occur, which melts just enough ice to provide a very thin layer of water that acts as a natural lubricant for the ice skates.

Easy to Skate On?

Ice skating on synthetic ice is just about as easy as it is to ice skate on frozen water. If you know how to ice skate well, you should not have any problems at all skating on the flooring. The only thing you might notice is a slight drag with a little resistance. This is a small problem that you will get used to very quickly. As for whether or not it is easy…that’s up to you to decide.

***Sniper’s Edge Hockey loves Canada! We proudly ship all of our products to Canada and offer the same return policies as we do for everybody else. We realize the exchange rates for the Canadian dollar are not the best right now, so we’re trying to help by giving you free shipping and no customs/duty.*** 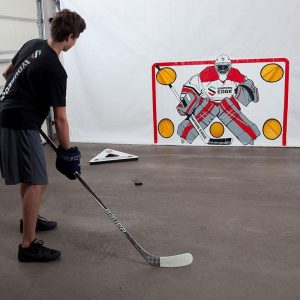 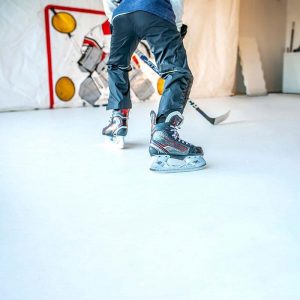